Tighter Than My High School Jeans

My husband is incredibly tight. Tighter-than-my-high-school-jeans tight. (Not that I still have them. I’m not nearly as tight as he is.)

One Saturday morning, he crawled into bed beside where I was propped up with pillows, checking email on my laptop. He said, “Whachawanna do today?” He was all sweet and cuddly with his scrubby weekend beard. I shrugged with a smile, and said, “What do you suggest?”

He suggested a movie the kids have been begging to see. I said that sounded good, and googled the showtimes for him. Then, I did something that I wouldn’t have done early on in our marriage–something that experience has taught me.
I googled the cost of the tickets. 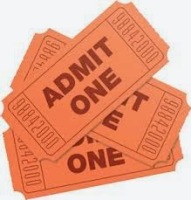 Turns out I was right about his sticker shock. “$9.75 for one ticket? That’s outrageous!” he said with true disgust, gawking at the screen on my lap. I nodded sympathetically. As he chugged out our tickets’ exact dollar amount in his brain, I reminded him that the kids had friends coming over today. I said that we should probably think about whether we’re inviting them to come along. ‘

“Come along?” he said, rising out of his snuggley, quiescent Saturday-morning-posture. “I mean, if they came, does that mean that I pay for them, too?”

I dropped my head, laughing, and asked him, “How much do you make, again?” He gave me a sheepish grin.

I told him I wasn’t sure, but I didn’t want our kids to have to say, “My dad says you can come, but only if your parents pay for your ticket.” I thought this might make him look a little… ungenerous. He laughed and said, “OK, you’re right. I’ll pay whatever I need to pay.”

That evening, we floated past the ticket counter without even the slightest scowl, sigh, or rolling of my husband’s eye. Why? Because I had had set Mr. High School Jeans up for success.

See, here’s what I’ve learned. The man truly is generous. You just have to give him opportunity to decide beforehand that he’s going to be. You can’t spring it on him. He has to add it up, and deduct the total from the stash in his wallet before you even reach the cashier. Before you even pull into the parking lot. Before you even get into the car! My job is to draw that generosity out, and I know just how to do it.

Whatever his weakness, you know it. And it’s your job, as the lovely lady on his arm, to help him graciously sidestep that thing that you saw from five miles back, lying there ready to trip him up.

I looked up movie ticket prices today. What did you do to set your guy up for success?

From the platform, the page, or the podcast microphone, I'm inviting you to open your Bible with me, drink deeply of the Story, and live like it's true.

Can I get your email? I'll send you some welcome freebies, my latest (seasonal) email, plus 20% off in my shop!