Lambeau Field: Hold Up Your Card! 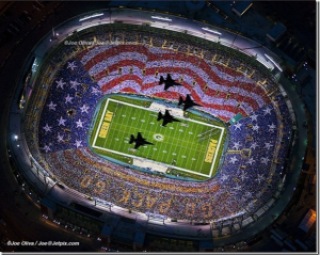 If you know me well, you’re wondering why I’m doing a post that is in any remote way related to football. Just to clarify, I’m the football fan, who, at last week’s HS game said to the guy next to me, “Now, what do you mean by the chain gang?” He was so nice. He pointed down to those guys standing on the edge of the field holding big sticks with a chain in between them. I can honestly say I’ve never paid any attention to them. But my new friend explained, without making me feel the least bit patronized.

Now, I can’t claim to understand about the downs yet, but please don’t try to explain. It’s not that no one has tried. I think I’m just football illiterate. Plus, I get way distracted by all the other fun stuff going on around me at football games. 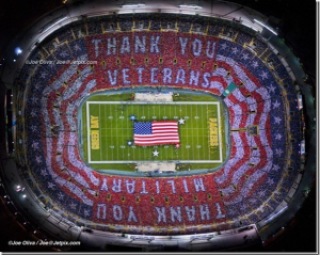 If I had been at Lambeau field that day, I’m quite sure I would have gone home talking way more about this than any downs or chain gang act, or whatever the rest of you football people talk about. This is so awesome! I’m told it took 90 people two weeks to get all of the colored card boards mounted under each seat–with each board in just the right place to have the collective effect. The boards each had little slits for eyes, so that the fans could see and participate in the experience, rather than just create a picture for the internet to enjoy.

This is such a great picture of the body of Christ. For all of our differences and contrasting colors, we create a collective picture of Jesus. We aren’t conformed as individuals into the image of Christ; we’re conformed collectively into his image. Paul says we are ‘members one of another’*. Our differences are part of the design and in unity (not conformity), we show the world what Jesus looks like.

So the next time you look through your little eye slits and see other Christians who look different than you, don’t be offended. Maybe they’ve just been given a different color card to hold. And if you see God doing something fantastic for another Christian or group of Christians, don’t be jealous or irritated or feel left out. That would be like one of the fans at Lambeau field saying, “But I wanted to be a red, not a white!” Instead, be filled with exuberant joy, because you get to be part of something great! Hold up your card and show God to the rest of the world.

PS. Happy football season to you! If you find me at the game, I’d be happy to point out the chain gang.

From the platform, the page, or the podcast microphone, I'm inviting you to open your Bible with me, drink deeply of the story it tells, then live like the story is true.

Sign up today and get my latest (seasonal) Live Like It's True email, plus some welcome freebies and 20% off in my shop!