Her Turkey Got Poor Reviews

She had decided that a 20 pound turkey wouldn’t do. She needed at least a 23-pounder. And after searching for days, she finally found a big ‘ol 24 pound bird. It had a freezer all to itself. It was the largest, hormone-injected, can’t-walk-on-its-own-legs, butterball turkey in the whole city. And it was hers.

She had to borrow freezer space from a friend; it wouldn’t fit in hers. And then it took two full days to thaw. She spent a large part of those days figuring out how to make this the best tasting turkey that had ever graced a Thanksgiving table. She researched tips and tricks and recipes. She watched youtube videos on how to make gravy. (Gravy was very important; she knew this full well.)

So now the day had come. The family was gathered. The feast was prepared. And she shared her prized turkey with the people she loves most upon the face of this earth.

As forks were raised, she watched and waited. She measured expressions. She listened for clues. Would she receive the blessing? Or would she be passed over? 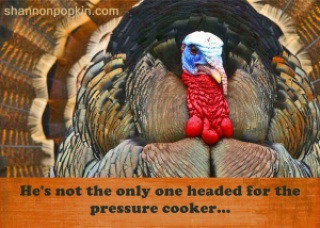 Sadly, the bird didn’t get the raving reviews she was hoping for. After the meal, there was talk about it being a ‘big boned’ bird. The meat hadn’t gone nearly as far as they expected. Never mind the fact that the kids were all teens now, and there were six extra visitors. They were disappointed in what the bird had yielded. Yes, disappointed indeed. There hadn’t been enough meat. No, not nearly as much as they were expecting.

For thirty, painful minutes, they lingered on the subject. And now, a year later, the event lingers in
her mind. She had tried so hard to please them. If they had just told her what to do differently, she would have done it. But the criticism she received last year probably won’t motivate her to try harder this year.

Though my friend’s turkey may not have produced the desired amount of Thanksgiving leftovers, it offers plenty of leftover food for thought–especially for Control Girls.

As we ramp up to the holiday season, we’ll be giving a lot over the next six weeks. We will give up entire afternoons or evenings… to shop for gifts and wrap them; to decorate our houses and get ready for guests; to gather ingredients and prepare food.

It’s difficult, though, to be gracious when the ‘Senior Control Girls’ of the family have such impossible expectations. Their delivery might be subtle, but you get the message loud and clear: You didn’t make enough or you used the wrong recipe or went to the wrong store. Or maybe the turkey you brought was ‘big boned’.

It’s enough to make a ‘Junior Control Girl’ become resistant, resentful, or withdrawn. (Which is how we pass the Control Girl tradition on down the line.)

Now these ‘Senior Control Girls’ aren’t trying to make everyone miserable. They’re just dedicated to making this holiday into one they’ve been envisioning for a lifetime. The scene they picture is a conglomeration of glowing childhood memories, heartfelt longings, and several pinterest photos–all rolled into one permanently lodged mental image, which they can’t be free of.

And you can’t be free of it either, since you’re the one they’re trying to control. So what should you do? Stop trying? Throw your hands up? Implode with frustration or lash out in anger?

“Each one must give as he has decided in his own heart,
not reluctantly or under compulsion,
for God loves a cheerful giver.”


This verse says that your gifts should originate in your heart. What you give should be determined by you and Jesus–not Great Aunt Mary or your Mother-in-law. Perhaps you want to give home-made gifts, or  bring store-bought rolls. Great! Decide what you will give, and do so with all the cheerful, wholehearted gusto you’ve got. God loves a cheerful giver!
But what you must avoid is being a resentful giver. Whatever you host or make or bring or buy this year, let it not be given “reluctantly or under compulsion”. That’s the opposite of cheerful giving.
This can be a challenge, especially given your family history. But even if your mother sighs and says, “I guess we’ll have to live with Pillsbury crusts, now that my arthritis has set in…”, it doesn’t mean you are obligated to make two dozen homemade pie crusts. Even if your sister-in-law complains that her house is too small, it doesn’t mean you’re required to begrudgingly open your home to fifteen house guests for a week.
Don’t be guilted or coerced into reluctant giving. Rather, pray that the Lord will show you what you should give. It may or may not be what Aunt Sally has in mind, but that’s okay. Her only hope for peace and joy this season is in the Lord, not your twenty-four pound turkey.
Give cheerfully what you want to give. And then afterward, don’t be burdened with the ‘reviews’.
God wants you to be free of that. He wants you to be free to truly give.

From the platform, the page, or the podcast microphone, I'm inviting you to open your Bible with me, drink deeply of the Story, and live like it's true.

Can I get your email? I'll send you some welcome freebies, my latest (seasonal) email, plus 20% off in my shop!